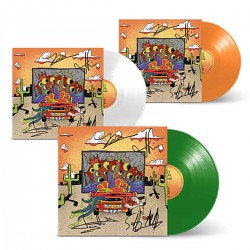 Limited to 300 copies each – preorder now!

This vinyl bundle pack includes THREE exclusive colour edition vinyl LPs of The Dust Coda’s brand new album, ‘Mojo Skyline’, available only through the Earache Webstore. As an additional bonus, the first 100 customers to buy this bundle will also receive an orange tote bag featuring a variation of the album artwork. This tote bag is unavailable anywhere else.